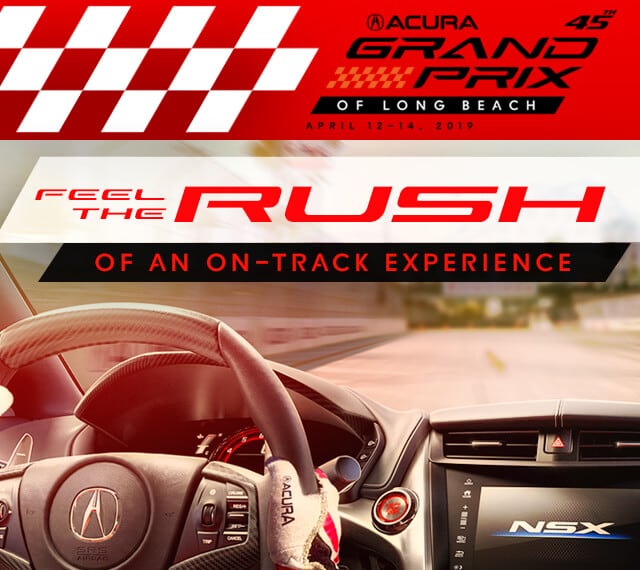 Come by any Southern California Acura Dealer to Test drive a new Acura from March 20 - April 7 and get two tickets to the Acura Grand Prix of Long Beach.

— Plus a Chance to Win An On-Track Experience —

With a test drive, your salesperson will enter you for a chance to be one of seventeen lucky winners to take a hot lap around the Acura Grand Prix of Long Beach track in an Acura NSX! Get a bonus entry by sharing a picture from the salesfloor display on Instagram using the hashtag #AcuraHotLapContest.

Just Flash Your Acura Key
at the entrance to Lagoon Park, April 13 & 14, for access to the Acura Owners Lounge for you and a guest. Enjoy some Acura Owners Perks, including complimentary soft drinks, snacks, and guided Paddock tours. Plus Meet & Greet opportunities with the IMSA Drivers, George Steinbrenner IV, a Pre-Race talk with Al Unser Jr., and an exciting Meet & Greet with the youngest winner in history of any IndyCar Classic... Colton Herta! 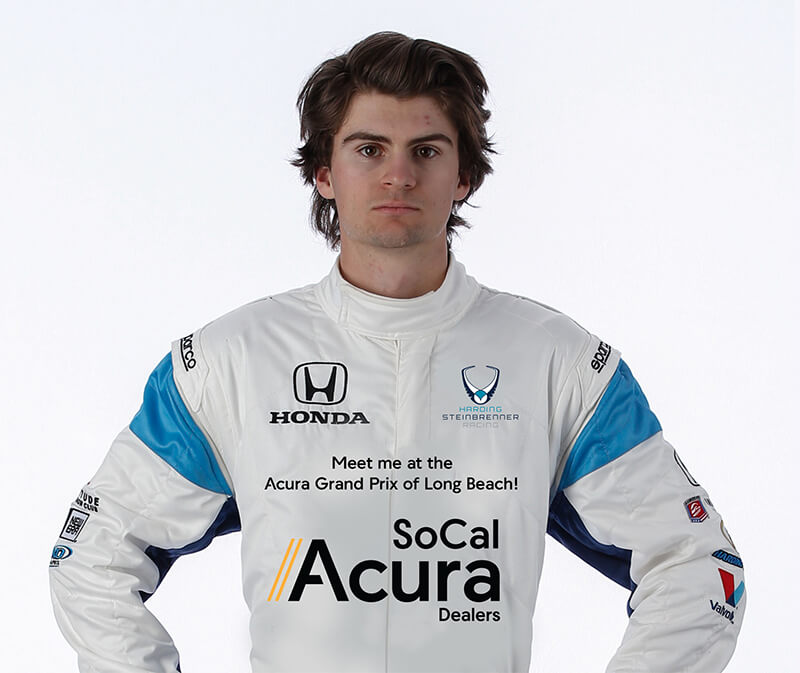 Proud sponsor of the Acura Grand Prix of Long Beach

Acura, the luxury automotive brand from Honda, is the title sponsor for the 45th annual Grand Prix of Long Beach that will take place April 12-14, 2019.

Last year, Acura made a successful return to the top level of sports car racing in the IMSA WeatherTech SportsCar Championship, fielding two entries in the Prototype class with Team Penske. The driver combinations of Juan Pablo Montoya/Dane Cameron and Helio Castroneves/Ricky Taylor finished fifth and seventh overall in the championship, with Montoya recording the first pole for the new Acura ARX-05 at Long Beach. Acura also continues to have entries in the series' GTD class with the NSX GT3 Evo, and has accomplishments at all levels of sports car racing.

"With our U.S. headquarters nearby in Torrance, this is a true 'home' event for the Acura brand," said Jon Ikeda, Acura vice president and general manager. "The Grand Prix of Long Beach is one of North America's premier motorsports events, and an institution in Southern California. Acura is delighted and proud to be associated with the Grand Prix of Long Beach, and we look forward to a long and successful partnership."

NSX
NO PURCHASE NECESSARY. A PURCHASE WILL NOT INCREASE YOUR CHANCES OF WINNING. Must be legal resident of CA, 18 years or older as of the start date. Sweepstakes ends 4/7/19. Click here for official rules with complete eligibility, prize descriptions, odds disclosure and other details. Sponsored by SoCal Acura Dealers Association. Void where prohibited.
My Preferred Dealer: Not Set [Choose Preferred Dealer]
Removing Vehicle...
Adding Vehicle...
3 Vehicles have already been added.